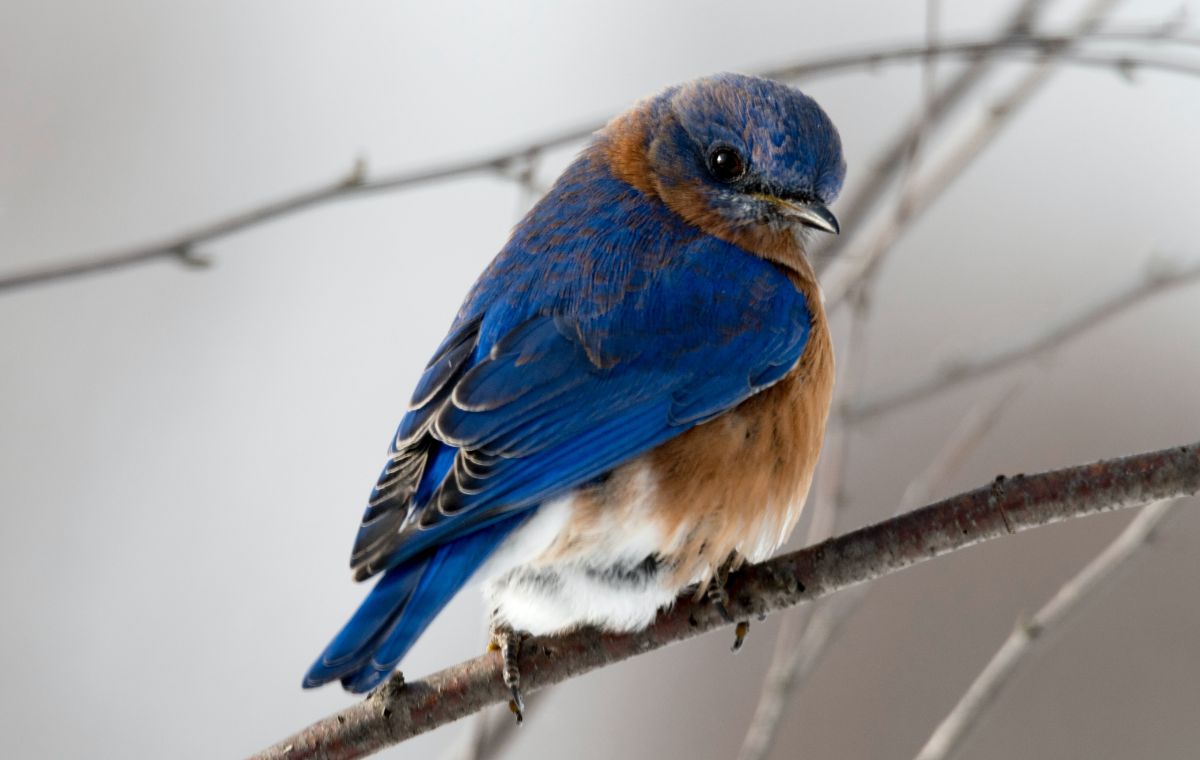 Beneficial birds? If that seems like an oxymoron, you may be surprised to learn that there are plenty of beneficial birds you’ll want in your yard. Beneficial birds provide insect control (bye-bye, garden pests), stop rodents in their tracks, and make your backyard sing.

Here are the nine beneficial birds you want in your yard:

Bluebirds not only add a rare azure color to your yard, but these tiny blue flyers are the ultimate in backyard pest control.

There are three types of bluebirds in the U.S.:

Their names correspond roughly to their territory, with the Eastern Bluebird being the most widespread. There are slight differences among the three, but one thing they all have in common is their love for insects. Here are a few insects they munch on:

The Eastern Bluebird will occasionally snack on a tree frog or lizard, as well. Bluebirds relish native berries in fall and winter, so consider planting blackberries, bayberries, eastern red cedars, hawthorns, or sumacs to attract these pretty pest controllers.

What bluebirds look like: Mature bluebirds are blue in color from the crown of the head to the tip of the tail. The Eastern and Western Bluebirds are red-breasted while the Mountain Bluebird is a lighter color blue across the breast.

Where bluebirds live in the U.S.: Bluebirds live year-round or breed across most areas of the lower 48 and Alaska.

With an oversized black- or brown-capped head, tiny round body, and cheerful whistle song, it’s hard not to say “aww” when a chickadee is around. But don’t underestimate these cute but mighty birds: Insects don’t stand a chance against them. These are a few of the insects these chick-a-dee-dee-dees will happily steal from your yard:

Found in nearly every state, their diet varies by where they live and what is available each season. Some also eat seeds (including weed seeds), small fruits, and berries.

Chickadees love nesting in deciduous and coniferous trees, so consider planting a willow, cottonwood, alder, birch, or white pine tree to attract them. You also can set up a feeder or nesting box to give these adorable feathered friends a winter retreat.

What chickadees look like: Adult chickadees in the U.S. have a familiar stroke of white along their cheeks and a usually solid “cap” on their head. Otherwise, the coloring varies from gray to black to chestnut or brown along the back. Breast colors can be cream, white, chestnut, brown, or gray. Other distinctive markings along the throat and back help distinguish each species.

Where chickadees live in the U.S.: Chickadees of one species or another are found in nearly every state in the lower 48 and Alaska.

Goldfinches are the ally you need if weed control is a problem. Goldfinches eat mostly seeds year-round while a very small portion of their diet includes insects.

In one study, the European Goldfinch reduced invasive musk thistle weed seeds by 32% before they fell to the ground or were carried off by the wind. While European Goldfinches aren’t found in the U.S., we have our own three goldfinch species that make a meal of weeds. Tough dandelions and thistles have met their match.

Here is a sampling of what goldfinches like to eat:

What goldfinches look like: Goldfinch feathers include yellow, black, gray, or white. The color patterns vary widely across the three species. Some juveniles have markedly different color patterns than their adult counterparts.

The four nuthatch species in the U.S. feed primarily on insects in the summer, protecting your vegetable garden from unwelcome guests and controlling the spread of the invasive, forest-destroying spongy moth.

Nuthatches supplement their insect diet with seeds and berries in the winter. Here are a few of their favorite treats:

Some nuthatches also will eat suet cakes. If you want to attract more nuthatches to your yard, DIY suet cakes are a fun project for the whole family.

What nuthatches look like: Adult nuthatch appearances vary considerably from one species to another. Some have crowns that are brown, while other nuthatches have a brownish-gray or black crown with a band of white above or around the eye. The throat is white or chestnut. Back colors are gray-blue and black.

Fun Fact: Wonder how nuthatches got their name? These tiny birds “hatch” the seeds out of nuts and covered seeds by hitting them with their beaks.

If small rodents are scratching away at your peace of mind, hoo-hoo-whom should you call? Consider calling on owls as part of your integrated pest management (IPM) rodent strategy. There are around 20 species of owls across the U.S. They’ll eat just about any small mammal that moves along the ground, plus a few other unwanted critters:

For winter shelter, owls love dense evergreen trees. Plant a pine, spruce, or juniper tree to attract these highly-trained rodent assassins. If small or medium-sized owls like the Western Screech Owl or the Barn Owl live in your region, build and install a nest box.

What owls look like: Feather colors, patterns, height, wingspan, and weight vary, but their broad face and striking, large eyes are common across the species.

Where owls live in the U.S.: You can spot these large-eyed, beneficial birds in all of the lower 48 states and Alaska.

Native sparrows (not including the House Sparrow, which is a non-native species) primarily eat insects and seeds. Their summer diet and food for their young is often primarily insects, while seeds and berries predominate later in the year. There are dozens of native sparrow species in the U.S. at some point in the year.

Here is a sampling of sparrows’ varied diets:

What sparrows look like: Sparrows vary greatly in coloration, pattern, size, shape, and silhouette. Check out the link above to see a photo for each sparrow in the U.S., courtesy of The Cornell Lab of Ornithology.

Where sparrows live in the U.S.: Sparrows can be found in all lower 48 states and Alaska at some point in the year.

Swallows are like the Shen Yun of the bird world. Often described as acrobatic, these aerial foragers are prized for another, more practical purpose: Eating bugs. And when they eat, they feast. Barn Swallows can eat up to 60 insects an hour, and one study from the Lake Tahoe area found that a single Cliff Swallow can eat up to 1,000 mosquitoes per day.

If you’re interested in these acrobatic insect eaters, here are a few other bugs they’ll take from the skies:

On occasion, some species of swallows eat berries and seeds, as well.

What swallows look like: These birds vary in appearance: Some are brown and plain while others have iridescent blues and greens along their backs and crowns. A few species even have orange-colored back or breast feathers.

If you live in the Southeast or Southwest, titmice will gobble up the pesky bugs invading your yard and look adorable doing it. These small acrobatic birds resemble chickadees, but instead of a rounded head, they have a feathery tuft that stands straight up, resembling a tiny mohawk.

There are five titmouse species in the U.S., four of which live in the Southwest while the Tufted Titmouse lives in the Southeast and throughout most of the Eastern Seaboard.

These birds eat seeds and insects primarily. Here is a sampling:

What titmice look like: Titmice are easy to spot with the crest of feathers on the crown of their heads. Titmice are predominantly gray with black or white flourishes. The Tufted Titmouse has blue-gray feathers on its back with white feathers on the breast and a copper-orange streak about halfway down the body underneath the wing.

Where titmice live in the U.S.: The Tufted Titmouse lives year-round in the Eastern U.S. The other species are located in much smaller areas in Texas and the Western regions.

With plain brown feathers, wrens may not be the showiest of birds, but they have beautiful effervescent voices that’ll cheer you up on the cloudiest day. Plus, wrens are the opposite of picky eaters: These tiny birds eat a buffet of insects. Here are a few they find tasty:

Wrens will make a home of just about any enclosed space. They love nest boxes, watering cans, boxes you’ve been meaning to recycle, and even old boots.

What wrens look like: Wrens are various shades of brown, tan, white, and gray. Many have speckled patterning on their back feathers and long, protruding beaks.

Where wrens live in the U.S.: Wrens move across most of the lower 48, and even into Alaska, at some point in the year.

How do I attract beneficial birds to my yard?

It depends on the species. Even amongst the three types of bluebirds, for example, there are different nesting habits and habitat needs. Here are sites to learn more about each species and how to build an environment that will attract them to your landscape:

FAQ about beneficial birds you want in your yard

Which birds are considered pests?

House sparrows, starlings, and pigeons are non-native, pest bird species that are considered invasive and are not protected under federal law. If you have a problem with these birds, contact a state or local wildlife agency to determine the best control method.

What are the benefits of attracting birds?

How do I create a bird-friendly landscape?

Here are two basic, easy ideas on how to start landscaping for the birds:

1) Ditch the chemicals
Pesticides, insecticides, herbicides, and rodenticides need to go the way of the dodo bird, or your backyard birds may follow suit. Look up integrated pest management (IPM) strategies to deal with problem pests. Birds are one way to reduce many insect species, but a coordinated approach is usually most effective.
2) Provide the necessities of life
Birds need the same basic necessities as humans: food, water, and shelter.

Food: Install native plants to feed your birds. How do native plants feed birds? Local insects and their larvae fly to these plants and provide an insect buffet to local birds. (Caterpillar lunch, anyone?)
Install various types (ground covers, shrubs, perennial flowers, and trees of multiple species and heights) to provide year-round forage, insects, and shelter for native birds. Don’t forget to throw in a few evergreen species as well for winter cover.
Don’t throw out the bird feeders just because you have native plants. Bird feeders can be a helpful complement to native plantings, especially in the winter. Buy several different types (tube feeders, suet feeders, and tray feeders are popular) and place them at different heights to attract a variety of birds to your landscape. Clean bird feeders regularly to prevent the spread of diseases.

Water: Water features or other reliable water sources are valuable resources for thirsty birds. You can even buy simple bird bath heaters to keep the water above freezing in the winter.

Shelter: Alongside native plants, birdhouses are ideal for attracting birds to your yard. Native plants and birdhouses provide nesting sites and winter protection for some birds. Clean your birdhouses between clutches (when eggs are laid) to prevent disease.

Learn to create the proper nesting box for each species of bird. Don’t throw one together and hope it works. The size of the entry hole, height, and location in the landscape matter!
With two eyes toward the sky, you may not notice what’s going on underneath your feet. Let our local lawn care pros take care of your lawn so you can spend time creating a bird-friendly ecosystem in your backyard.

Sarah is a writer who has previously worked in the lawn care industry. In her spare time, she likes to garden, raise chickens, and mow the grass with her battery-powered lawn mower.
Posts by Sarah Bahr