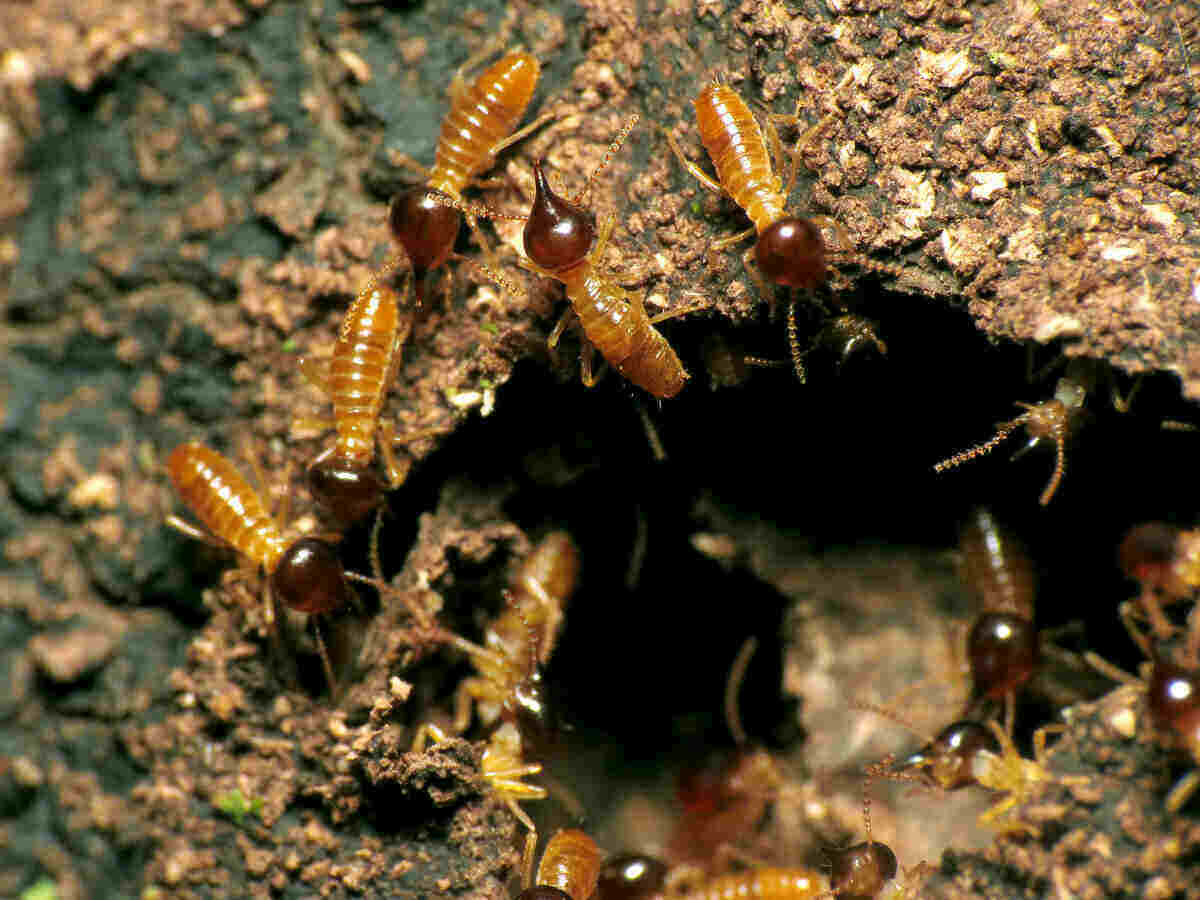 You found some holes in your wall and maybe a pile of debris nearby and you’re worried you have termites. The first thing you should do is verify whether what’s causing the damage is really termites or one of these common bugs that look like termites and act like them, too.

The difference between termites and these look-alikes could be thousands of dollars in extermination and structural repair costs.

This guide with pictures will help you identify the pests in your home so you know what to expect.

How to identify termites

Before we can compare other bugs to termites, you have to know what actual termites and termite damage look like.

What termites look like: Most termites are about ¼-inch to ½-inch long. They have a wide thorax (the middle section of their body), so the whole body is about the same width. They’re usually brown, but they can be white or black, too.

Swarmers (flying termites) have two sets of wings, and all four wings are equal in length. When folded, the wings extend about twice as long as the termite’s body. All termites have two straight antennae.

What termite damage looks like: Signs of damage vary depending on the type of termite.

There are three types of termites:

Subterranean termites live underground and must be in contact with the soil to survive. They have to build “mud tubes” out of dirt, wood bits, and saliva to travel up wood structures.

Drywood termites don’t need soil or a water source to survive. They can nest in dry wood anywhere in your home without leaving an obvious trail like subterranean termites.

The most noticeable signs of termite infestation are:

Now that you know what termites look like and what signs they leave, let’s compare that information to these 5 common bugs that look like termites.

The main reasons people confuse carpenter ants with termites are that they both damage wood, and they both swarm (fly around in large numbers) during their mating season.

Here are the main differences you can use to tell whether you have termites or carpenter ants.

What carpenter ants look like: Carpenter ants range in color from reddish-brown to black. They’re typically 9.5 to 13 millimeters long. A carpenter ant has a heart-shaped head with two bent antennae and a tapered thorax (the middle segment of the body).

What carpenter ant damage looks like: Carpenter ants bore holes in wood and leave the excess behind. You might find their leftovers in piles of shredded wood near your walls or other wood structures where they could be nesting.

The shredded wood left behind by carpenter ants (“frass”) isn’t easy to spot. A lot of the time, it’s actually inside the wall void where you would never see it.

Carpenter ant tunnels are clean and smooth, so much so that it might look like someone sanded them on the inside. Termite tunnels are rougher because they’ve been chewed.

Carpenter ants aren’t the only ants that fly. Mature reproductive ants of any species will develop wings so they can fly away, find a new nesting site, mate, and start a new colony. Ants fly only during mating season, which happens during warm times of year.

Flying ants move in swarms, much like termites. Some homeowners see swarms of bugs and assume the worst. But here are the easiest ways to tell the difference between termites and flying ants.

All species of flying ants have a few things in common. They all have two bent antennae, a three-segment body with a narrow middle, and two sets of wings. Their front wings are longer than their rear wings.

What flying ant damage looks like: Most ant species are not wood-boring insects. With most flying ants, you’ll see no evidence of wood damage. In fact, most flying ants don’t cause any damage at all.

Flying ants can still infest your home and get into your food, though. If you notice swarming bugs eating your food (including food debris like crumbs), that’s a sure sign that they’re ants, not termites.

Acrobat ants like to nest in wood, especially moist wood, and insulation. If they get inside a building, they typically nest in the wall voids. Because they can be found in wood and inside walls, people sometimes mistake acrobat ants for termites.

A lot of the time, acrobat ants will nest in the wood galleries and tunnels left behind by previous termites or carpenter ants. If a termite nest you already dealt with appears active again, you may have acrobat ants rather than a second bout of termites.

Here are the key differences you can look for to tell if the bugs in your walls or another moist wood structure are termites or acrobat ants.

What acrobat ants look like: Acrobat ants are small, only about 2 to 3 millimeters long in most cases. They have a heart-shaped abdomen with a stinger and a narrow thorax (the middle section of their body) that resembles a cinched waist.

Like other ants, acrobat ants have two bent antennae and two sets of wings. The front set of wings is longer than the back set.

The most distinctive feature of acrobat ants is their reaction when disturbed. They essentially stand on their head and lift their abdomen (behind) and legs in the air (kind of like an acrobat…get it?). They may release a foul odor when disturbed, as well.

What acrobat ant damage looks like: Acrobat ants don’t cause as much damage as termites or carpenter ants because they don’t usually bore their own tunnels. They may leave some bits of wood or insulation near walls or your foundation.

Check electrical wires or pipes coming in from the outside for ant trails (ants marching in a row). Acrobat ants often use these openings to get into your home. They can sometimes cause problems with electrical wiring.

Carpenter bees’ holes in wood structures might make you think you have termites, but that’s about all these insects have in common. You shouldn’t have any trouble telling a carpenter bee from a termite once you lay eyes on the pest itself.

These are the easiest ways to differentiate between the two.

What carpenter bees look like: Carpenter bees look very similar to bumblebees but without the stripes. They have shiny black bodies and yellow fur on their thorax (the middle part of the body). Their bodies are chubby, round, and about 1 inch long in most cases.

Carpenter bees live independently, not in colonies, so you should only see one of them at a time.

What carpenter bee damage looks like: Carpenter bees drill tunnels in wood to make their nests and lay their eggs. Since there’s only one carpenter bee at a time, they only need small nests and don’t cause nearly as much damage as termites or carpenter ants.

Holes in wood created by carpenter bees are perfectly round and about as wide around as your finger. You’ll usually find sticky yellow waste, which might look like a yellow stain on the wood, and piles of sawdust near a carpenter bee hole.

Most of the time, you’ll find carpenter bees in unfinished and unpainted wood structures.

These are the primary differences between termites and powderpost beetles.

What powderpost beetles look like: Adult powderpost beetles are around the same size as termites, ranging from ⅛ inch to ¾ inch long. Their bodies consist of a small, round head and thorax and a much longer abdomen in the back. They are reddish to dark brown in color.

Swarming beetles have two sets of wings, one in the front and one in the rear. The front wings are rigid like a shell, and the rear wings are the ones they actually use to fly.

Note that powderpost beetles are active at night, so you aren’t likely to see one. You’re more likely to find the damage they cause.

Adult powderpost beetles lay eggs in cracks and holes in wood surfaces. The larvae feed and grow until they become adults who escape the nest by drilling holes in the wood, which are the holes you see.

Depending on how many powderpost beetle larvae are living in a wood structure, you might find one or several holes about the size of a pinhead. The holes will be surrounded by very fine sawdust that looks like powder or flour.

Powderpost beetles don’t infest finished wood because finished wood has no cracks or crevices for the female beetle to lay her eggs in. They usually prefer hardwood such as walnut, hickory, or bamboo. The larvae typically can’t survive in older wood because of a lack of nutrients.

There is one species, the Anobiid powderpost beetle, that infests both hardwood and softwood. It can successfully feed on older wood, too. This species is most common in southeastern and coastal states with high temperatures and humidity.

What to do when you have a termite infestation

Take termites seriously. If you’re noticing signs of an infestation now, that could mean the colony has been inhabiting your home for several years. In walls, that means serious damage to structural beams.

As soon as you suspect termites in your home, call a professional pest control technician. They might find an extensive termite colony and years’ worth of damage, or they might find one of these less harmful look-alike pests.

Even if you’re pretty sure the termites are only outside, it’s still a good idea to get a professional termite inspection for your home. You would much rather be safe than sorry when it comes to termites.

A good way to keep pests at bay is to keep your property trimmed and maintained. If you would rather keep your weekends for fun and activities, consider calling a local Lawn Love pro to help you with your lawn care.