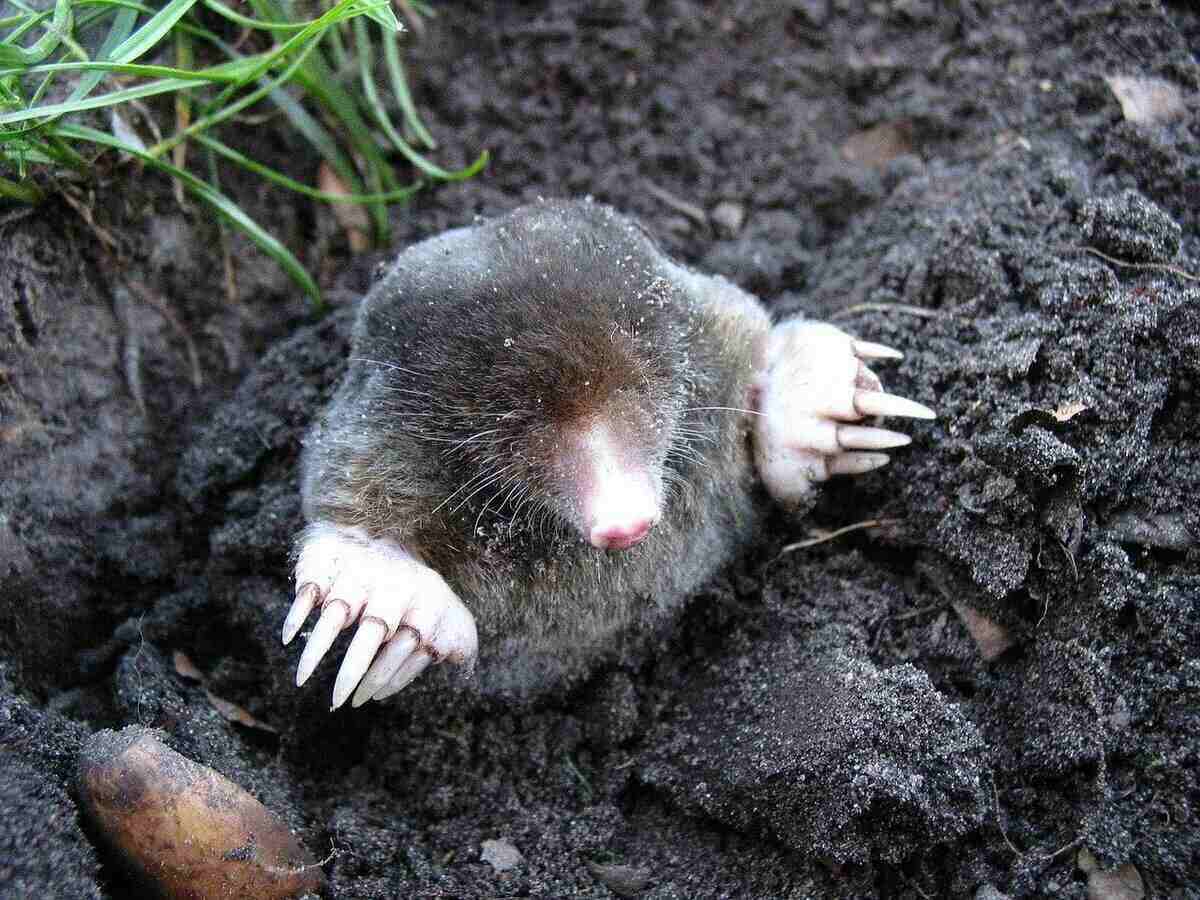 When you’ve got a mole in your yard, don’t make the rookie mistake of using bait or gum to control it. Although removing a mole takes patience, the fastest way to get rid of moles in your yard is to trap them. Our guide on mole removal covers identifying the critter, control methods to avoid, and how to spot the signs of a mole digging in your yard.

Here’s what you will learn in the mole removal guide down below:

Before you try to remove moles from the yard, you’ll need to correctly identify the critter. Moles can be easily mistaken for animals that require a different control method, such as pocket gophers or voles. A mole trap isn’t going to catch a gopher. And a mole isn’t likely to eat gopher bait.

You can quickly identify a mole by looking at its front paws. They have broad, paddle-shaped feet with long, sharp claws that will make you go, “Yikes”!

Moles are typically 4 to 7 inches long. Their eyes are so small that they almost look as if they have none. They also have no external ears. But what is noticeable is their long, pointed snout.

Their blackish-gray fur has no resistance in whichever direction you pet, a trait that allows moles to travel both backward and forward through the soil.

The difference between a mole and a vole

Let’s make sure the critter you’re dealing with isn’t a vole. Voles have a mouse-like appearance, which can help you distinguish them from moles.

Voles are about the same length as moles and have a mix of chestnut-brown and black fur. Unlike the mole, which has no visible ears and tiny eyes, the vole’s black eyes and prominent ears are more noticeable. Voles have blunt snouts and short legs.

But don’t confuse your vole problem for a mouse problem! Here’s a tip: Voles have shorter tails than mice. A mouse’s tail is typically the length of its body.

The difference between a mole and a pocket gopher

Pocket gophers are usually larger than moles, measuring about 6 to 10 inches in length. You can easily recognize the rodent by its exposed, yellow front teeth. Gophers have small ears, short legs, and fur-lined, external cheek pouches they use to carry food (it’s no wonder we call them pocket gophers).

There are many different species of pocket gophers, so not every gopher is going to look the same. Fur colors typically range between brown and gray, depending on the species.

How to get rid of moles in the yard

The fastest way to get rid of a mole is by trapping it. You may need to wait a day or two before the trap catches the mole, but the simple method only requires you to set the trap and then go about your business.

But before you set any trap in your yard, it’s essential to check your state laws. Some states prohibit the trapping of animals.

The most popular mole trap among homeowners is the Victor harpoon or plunger-style trap. It’s easy to set up and kills the mole quickly. If you want to catch the mole alive, consider making a mole pitfall trap.

Fall and early spring are the best seasons for trapping because moles are active near the soil’s surface.

Setting a trap may feel a bit tricky at first. But if you read the instructions carefully and remain patient, you should have success in no time. Here’s what you’ll need to do to set a harpoon trap:

If you don’t want to kill moles, you might prefer building a pitfall trap. This trap takes a bit of sweat to make, but you won’t sweat over worrying about the mole’s life. As the mole moves through its tunnel, it should fall into the trap and not be able to get out.

As you search for mole removal solutions, you might encounter home remedies or anecdotal methods that promise to remove moles from the yard. We’ve listed many of these techniques below.

Some of these techniques may have worked for your neighbor who swears by them. But before you dive right in, keep in mind that these mole-control solutions have inconclusive scientific results. If you’re looking to get rid of moles fast, you may not want to rely solely on the following methods.

Electronic, magnetic, and vibration devices intended to scare off moles have not been proven effective. While sonic mole spikes may frighten moles initially, the University of Arkansas Division of Agriculture warns that moles can quickly adapt to these sonic spikes and are unaffected by their presence.

Some gardeners might say, “Don’t knock a control method until you’ve tried it.” Borders of marigolds might repel moles from entering your garden, but the plant’s effectiveness at repelling moles has not been scientifically tested.

Filling up a mole’s burrow system with toxic fumigants often produces ineffective results. Moles will usually detect the gases and quickly seal off the affected tunnel.

The jury is still out on whether flooding a mole’s burrow system is effective. You may be able to encourage a mole to escape a flooded burrow occasionally, but results on the method’s effectiveness are inconclusive.

Every homeowner and their neighbor has read about homemade pest control recipes online. While some DIY homemade remedies do affect various pests, many homemade mole deterrents are not effective.

According to the New Jersey Agricultural Experiment Station, no scientific research has shown consistent results for the following home remedies and mole repellents:

The effectiveness of grub control as a mole removal solution is disputable. Moles love to snack on grubs, so the idea of removing their food source makes sense. But moles still have plenty to eat without a supply of grubs, including insects and earthworms.

Secondly, removing grubs may make the critter desperate for food if no other food supply is available, leading to further mole activity in your lawn.

Although toxic baits are available for mole control, little research supports whether using bait is a cost-effective alternative to trapping. Moles are meat-eaters, which means the baits you use to control herbivorous pocket gophers are not likely to work on moles. Some mole baits are worm-shaped, but their effectiveness is questionable.

Signs you have a mole problem

Volcanic-shaped soil mounds and raised tunnel ridges in the yard are the tell-tale signs of moles living in your lawn. Most lawns only house one to two moles, so it’s likely not a whole mole family you need to target.

Moles dig two types of tunnels: deep runways and surface tunnels. The deep runways are typically 12 to 18 inches below the soil’s surface, and the moles usually use them for daily travel.

When you spot a molehill in the yard, that’s likely where a deep runway is. Moles don’t typically create mounds of dirt when they build their surface tunnels, which they build just below the soil’s surface (the surface tunnels are what cause the uplifted ridges you often see in the yard).

Moles build surface tunnels primarily to forage for food in spring and fall. During the winter and dry summer months, moles move down to their deep runways, searching for food.

Why are moles bad for my yard?

Molehills and raised surface tunnels don’t scream beautiful front lawn. After all that work you put into keeping your turf thick and freshly cut, you don’t want to see a mole tearing up your landscape. The loose soil and uneven land also can make it difficult to mow the lawn.

Moles leave behind patches of brown grass as they tear up your turf’s root system. They can even dislodge a plant or two in your garden or flower bed.

Leave the moles to the pros

If you want to get rid of a mole infestation fast without losing precious time, hire a pest control professional to do the job for you.

And if the invited houseguest left your lawn in shreds, hire a local lawn care professional to nurse your grass back to health. Leave the moles to the pros so you can get back to enjoying your lawn hassle-free.