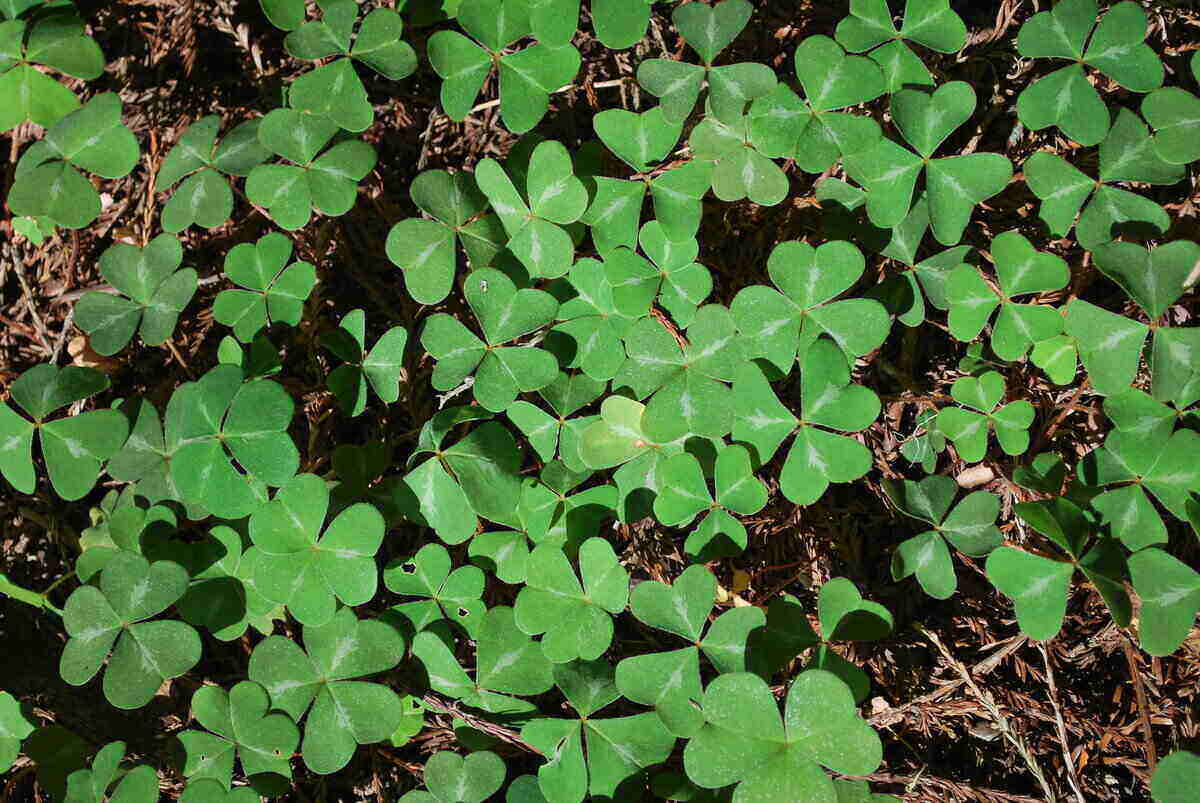 Want a healthy lawn without all the hassle? Give yourself and your mower a break by growing clover instead of (or in addition to) your regular turfgrass.

Planting clover as a ground cover is a great way to reduce the time and energy you spend on lawn care. Clover requires less water, brings in beneficial insects, improves poor soil, helps with weed control, and so much more. Read on to learn more about the benefits of planting clover in your yard.

What you’ll find in this article:

Clover made its way to North America from Europe in the late 1600s. It’s classified as a legume and is a member of the pea family. It is used worldwide, and there are more than 300 species growing across the globe.

In addition to being a cover crop, clover is frequently grown to be harvested and used as hay or forage for livestock. Clover attracts plenty of bees, which can result in the production of clover honey. Clover also attracts wildlife such as deer, turkey, and rabbits.

There are numerous benefits of planting clover in your backyard.

Have a sloping section of your yard? Planting clover can help keep the soil intact and prevent runoff pollution. Clover roots are fibrous and go much deeper than many people expect — sometimes up to 2 feet deep. These deep roots help keep the soil and its nutrients intact through heavy wind, rain, and other natural elements.

Clover’s long roots also help the plant bring nutrients up from deep regions of the soil.

Clover is a very hardy and resilient plant due to its dense root structure. This, in combination with its fast spread, makes it easy for clover to smother other plants — including weeds. Clover’s ability to out-compete harmful weeds reduces the time, energy, and money it takes to manage weeds in your yard. It also allows you to have a beautiful backyard without worrying about the environmental costs of using herbicides.

Clover and other members of the legume family hold a special quality that gives them great value as a ground cover: They put nitrogen back into the soil. This is known as nitrogen-fixing. As a nitrogen-fixing plant, clover can convert atmospheric nitrogen into a form that is available for plants to use, with the help of Rhizobium bacteria.

Get your soil tested to see what the nitrogen levels look like before deciding to plant clover. If your soil already boasts an abundance of nitrogen, adding even more nitrogen can slow plant growth and cause damage. You can tell if there’s too much nitrogen if plant leaves turn dark green, leaves turn yellow, or leaves turn brown and seem burnt.

Clover can be used to create green manure, which is made when you grow certain cover crops where you’d typically like to incorporate manure and fertilizer and turn them into the soil while they’re still green. Gardeners with established plots will usually plant cover crops and sow them in the spring so the garden beds are ready for summer produce.

When clover decomposes, a lot of nitrogen is then put back into the soil, providing up to 200 pounds of fixed nitrogen per acre of soil. This allows clover to heal nitrogen-deficient soil and reduces the need to use nitrogen-based fertilizers.

Want to reduce the amount of time you spend on lawn care? Clover checks the boxes for many of the characteristics of low-maintenance plants:

If you plant it at a ratio of 1:4 (clover to grass), you eliminate the need to add synthetic fertilizer to your grass. Additionally, most clover doesn’t need to be mowed. Some varieties might grow a bit taller but will not need to be mowed as frequently as turfgrass.

6. Good for the environment

Traditional grass lawns are not always the best choice for the environment. Many popular turfgrass species are not native to the region where they are grown, which is why they tend to be more challenging to take care of. Clover is a wonderful grass alternative that is not only easy to care for, but by planting it you’ll be giving back to the environment.

Clover is attractive to honeybees and other pollinators, many of which are under environmental threat due to habitat loss. By planting clover instead of grass, you’re providing bees and other pollinators a home to buzz around in. Clover also attracts insects that prey on harmful insects, such as ladybugs, lacewings, and parasitoid wasps. This will reduce your need to use pesticides on your lawn.

If you’re a farmer or own any livestock, clover is a great source of protein for your animals. It is extremely beneficial in helping animals digest their food. It also can be used in a feed mix for birds, such as chickens and geese. If you’re an animal lover, but don’t have any livestock of your own, planting clover may attract native wildlife such as deer, rabbits, and foxes.

Feeling hungry? When you have a clover yard you can go right outside and forage ingredients for a fresh salad. Yes, clover is edible – both the leaves and flowers can be eaten raw or cooked. They are high in protein and are a decent source of vitamins. Brew them into a tea or toss them with other veggies for a fresh salad.

Clover can be used to help treat:

8. Can be used as a living mulch

If you want to keep weeds out of your garden and invite pollinators, consider planting clover as a cover crop or living mulch. Clover works best as a living mulch around cool-season crops. Make sure to use a low-growing annual clover such as Crimson clover so it won’t compete with your fruits, flowers, and veggies.

There are a few things to be careful of when using clover as a mulch:

Clover is a wonderful option for homeowners across the country, but it might not be the right choice for everyone. Before you go out and buy some clover seed, take into consideration the few disadvantages of the lucky ground cover:

The three types of clover that are popular among homeowners include:

White clover, red clover, and strawberry clover are all perennials, meaning if the conditions are right they will regrow each year. They are very popular because of this, in addition to the fact that they are low-growing.

Other types of clover, especially annuals, are more popular among farmers who use the plant for pastures and foraging. Some other perennial varieties are better used for vast fields, typically because the clover and its florets are tall. Here are other types of clover you might encounter:

How to plant clover

Pure clover yards are suggested for lawns that experience light foot traffic. If you have kids or pets, consider including clover seeds in your grass mix. A grass-clover lawn can provide many of the benefits of clover and stay durable against heavy foot traffic.

If you have existing clover…

If you already have clover patches in your yard, you can encourage that existing lawn patch to grow by avoiding using herbicides that kill broadleaf weeds. Mowing with blades set between 1.5-2 inches also will help encourage clover growth since that height is considered low for most traditional grasses.

How to plant clover from seed

The best time to seed is from mid-March to mid-April. Clover does not need to be planted deeply, sprinkling or raking in the seeds gets the job done. If you have a shady lawn, you’ll want to use twice the amount of seed to promote full growth. Mist with water daily until you see the clover sprouting up.

Avoid mowing during the summer to allow the clover florets to bloom and produce seeds.

Pro Tip: Mix clover seed with soil, sawdust, or sand for a better chance that the seeds will sow evenly.

Need a hand incorporating clover into your yard? Today’s your lucky day! Reach out to a lawn care expert near you to lend a hand with all your landscaping needs.