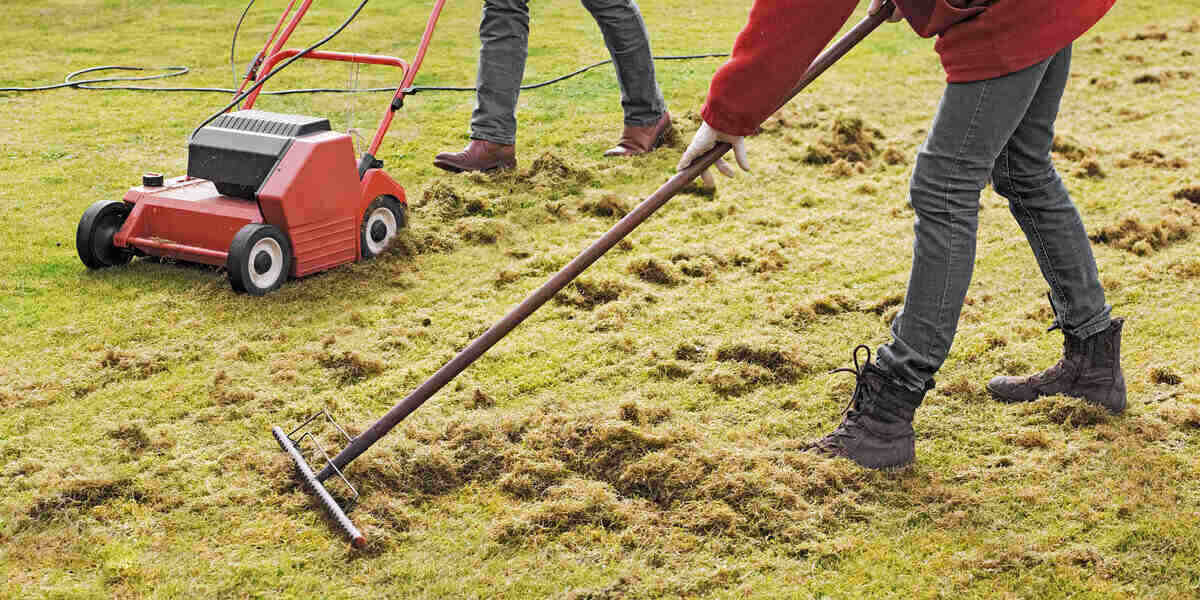 Dethatching may sound like a mind-control scheme straight out of a dystopian thriller, but it’s a little less exciting than that: It’s a process you perform on your lawn to help your grass grow green and healthy. If your lawn is starting to develop its own spongy, brown carpet, it may be time for a thorough dethatching.

Sure, dethatching may be less enthralling than Ray Bradbury or George Orwell, but it’ll prevent fungus and disease and keep your grass healthy. Even Big Brother would have to approve.

In this article you will find out:

What is lawn dethatching?

Dethatching is an efficient method of removing excess thatch (the layer of debris, dead grass, and other organic matter that lies in between grass blades and the soil’s surface) from your lawn so that nutrients, air, and water can reach the soil. Basically, dethatching is a powerful, deep lawn raking.

If your grass isn’t looking as green and dense as it used to, or if it’s increasingly susceptible to dry spots and diseases, it may be crying out for a thorough dethatching.

Dethatching is an excellent solution for lawns with excessive thatch buildup. Choosing to dethatch your lawn will:

Does my lawn need dethatching?

You can determine if your lawn needs dethatching by digging out a small slice of turf and measuring the thatch layer. It’s like checking out the layers of a chocolate birthday cake (with green icing).

Test the thickness of your thatch

To determine the thickness of your thatch:

You don’t just have to rely on a dethatching test. Your lawn will let you know if it needs a strong dethatching to get back into shape. Your lawn may need to be dethatched if:

When to dethatch your lawn

What time of year should I dethatch?

Dethatch during your grass’s growing season to keep lawn stress to a minimum.

Always avoid dethatching when your lawn is dormant or stressed. Make sure you don’t dethatch in the peak of summer heat or during a drought, as this can severely damage your lawn.

How often should I dethatch?

When it comes to a lawn care schedule, dethatching isn’t like aeration (removing plugs of soil from your lawn to decrease compaction): Lawn aeration is proactive and preventative, so you’ll need to aerate annually as part of a healthy lawn routine, whereas dethatching is a solution to a problem, so you’ll only need to do it if thatch becomes an issue.

With proper lawn care maintenance and grass seed that isn’t prone to thatch, you may only need to dethatch your lawn every few years. As long as the thatch layer stays thin, nutrients can reach the soil and grass grows heartily. The problems begin when thatch grows to more than a half-inch thick.

How to dethatch your lawn

When choosing a dethatcher, you have four main options. Luckily, none of them have hypnotic voices or make you wear spiky metal headgear.

How you dethatch will depend on which device you choose. No matter the method, you’ll want to mow your grass a bit lower than normal (to about half its regular height) before you dethatch.

Best for: Small lawns with a mild thatch problem (one half to an inch of thatch buildup).

Best for: Medium lawns with a mild to medium thatch problem.

Best for: Larger areas with a serious thatch problem and dense grass that can withstand tougher treatment.

Best for: Large lawns with a serious thatch problem that could benefit from overseeding.

Pro Tip: To prevent severe grass damage, only vertically mow centipedegrass and St. Augustinegrass once, in one direction only.

After you’re done dethatching, rake up the debris and compost it.

Pro Tip: If you’re not overseeding, apply a pre-emergent herbicide after dethatching.

Thatch is made up of dead grass, lawn debris, and other organic matter. It’s natural for some thatch to accumulate, but in a healthy lawn, microbes decompose thatch at the same rate as grass shoots are produced, so thatch production and decomposition are balanced.

High levels of thatch accumulating over a short period of time is a sign you need to make some changes to your lawn-care regimen.

Your lawn may have excess thatch due to …

Thatch isn’t always a lawn menace: A thin layer of thatch (less than half an inch thick) is healthy for your lawn.

Benefits of thatch in moderation

2. It’s great for play: A little thatch gives you traction when you’re walking or running and softens the impact of your feet on the soil. Lawns with a bit of thatch won’t get compacted as easily as thatch-free lawns.

3. Thatch improves soil quality by acting as a food source for beneficial bacteria.

The problem with thatch

When more than half an inch of thatch accumulates on your lawn, thatch whirls into its villain cloak and begins plotting lawn domination. Thick thatch can be a serious lawn health problem.

When thatch is over half an inch thick:

Your lawn’s susceptibility to thatch also depends on your grass species.

Tips to prevent dethatching in the future

We’ll say it: Dethatching is a pain. It’s a sweaty, muscle-heavy chore that eats into the time you could be spending with friends and family. Fortunately, with the right lawn care practices, you may hardly ever need to dethatch again.

1. What chemicals should I avoid to protect my earthworm population?

2. Can I both dethatch and core aerate my lawn?

Absolutely. Dethatching and aerating help your lawn in similar ways, but they provide different benefits. Dethatching rakes up the mat of organic matter that impedes the flow of nutrients, whereas aeration removes cores of soil to relieve soil compaction and gives roots space to grow.

If your lawn has both compacted soil and a thick layer of thatch, you’ll want to aerate and dethatch.

3. If I am both dethatching and aerating my lawn, which should I do first?

Dethatch before you aerate to remove surface debris. Dethatching will open up the soil, making aeration more effective for your lawn and less strenuous for you.

4. Are grass clippings hurting my lawn and adding to my thatch layer?

No, the idea that grass clippings cause thatch all by themselves is a myth. Homeowners shouldn’t worry about removing grass clippings on healthy lawns. Grass clippings do wonders for your lawn’s nutrient levels, quickly decomposing for the benefit of earthworms and microorganisms that maintain soil health.

The one exception? Grass clippings that are over an inch long can shade or smother the grass underneath it. In this case, you should go ahead and bag the clippings. Don’t toss them in the garbage, though. Take the eco-friendly route and use them as garden mulch or compost.

Rather than avoiding grass clippings, you’ll want to change your lawn care practices as we discuss in the “Tips to prevent dethatching in the future” section.

Attacking thatch, by yourself or with backup

As any sci-fi novel will tell you, standing up to a power-hungry villain is not for the faint of heart, and thatch sure is hungry for lawn control. If you’re ready to save your yard, dethatching is a worthy DIY project and combined with healthy lawn practices, you won’t have to do it often.

If you’d rather let an expert mount the resistance while you spend time reading something a bit lighter, you can call a local lawn care pro to dethatch your lawn for you. It’ll soon look like a real utopia.