Get a fast, free quote

How does it work?

Let us know what services you need help with, and we’ll give you an instant price estimate.

We’ll match you with a skilled, fully-insured lawn professional who will complete the work.

Easily manage everything from your phone or a web browser. Payment is all online, and you can book additional services with just a few clicks.

Let us know what services you need help with, and we’ll give you an instant price estimate.

We’ll match you with a skilled, fully-insured lawn professional who will complete the work.

Easily manage everything from your phone or a web browser. Payment is all online, and you can book additional services with just a few clicks.

353 new customers
have streamlined their lawn care in Salt Lake City by using Lawn Love. Give us a try today and see what everyone is raving about!

Get a free estimate →

Did you know?
Talented lawn pros using Lawn Love's platform have completed over 1349 jobs in Salt Lake City over the last year! We think it's safe to say you're in great hands. Why not give it a try today?

It is essential to trace back the history regarding the weather conditions, especially temperature, rain, ice, precipitation, humidity, types of grasses, and soils therein in a particular place. This is required to evaluate lawn maintenance's suitability and causes of problems confronted with yards. All homeowners love to have beautiful and well-maintained lawns awash with lavish green grass and colorful flowers. Several companies are dealing with lawn care services in your city. However, Lawn Love provides extraordinary benefits to customers' greater satisfaction because of qualitative work. Therefore, we are on the right path of identification and knowing things in their valid perspectives concerning variable conditions of weather. Salt Lake City has a climate of different cold and snowy winters, hot and dry summers, and modest to the light seasonal rainfall. Lying in the Salt Lake Valley, the city is surrounded by mountains and the Great Salt Lake. To maintain a lawn in such a complicated environment is an uphill task for a non-professional person.

Further, hectic lifestyles do not allow individuals to spare extra time for this purpose. However, you need not get concerned about your lawn care. Lawn Love is out there to look after it with specialized services as per your needs. If you are looking for a professional lawn care service, contact us on our landline numbers and web any time for reliable and transparent services.

Interested? Then let's chat! Contact Lawn Love today at 385-215-7209, or check out our two-minute quote, and find out how you can get a showpiece lawn - easily!

How often should I mow my lawn?

Here are the most common lawn mowing frequencies in Salt Lake City:

How are lawn care prices in Salt Lake City?

Prices vary depending on the size of the lawn and frequency of your service. Here are some average lawn care prices for homes in Salt Lake City:

While the frequency at which you should mow your lawn will vary from property to property, it's always recommended to maintain your grass at a regular interval. Too long between cuttings can cause shock to the plant and result in an unhealthy lawn or bald spots. At Lawn Love, we always recommend weekly or bi-weekly mowing services to maintain a lush healthy lawn your neighbors will envy!

We're proud to serve these fine neighborhoods around Salt Lake City. Ready to get started with your free, personalized quote?

Which lawn care services do I need this month?

Check out the calendar below for recommended services by month in Salt Lake City, UT

What's included in each service?

Proper mowing doesn't only give your lawn an attractive appearance, it also increases the density of your grass

Removing snow from your driveway and parking area, whether you have light snow that drifted up several feet high, or wet, heavy snow.

Selective herbicide spot-treatments to stop even the most aggressive weeds.

Puncturing the soil with small holes in order to let air, water and nutrients to absorb in the grass roots.

Spot treat bare areas with topsoil, which will improve the quality of the soil and allow the grass to grow.

Spreading fertilizer provides your lawn with the nutrients it is deprived of in order to better the overall health of the grass.

Cleaning out leaves and debris that may be clogging your gutters, and flushing the entire gutter system.

In addition to regular lawn maintenance, some circumstances may lead to a need for additional services, such as:

Removing outdoor debris is important for keeping your backyard healthy, growing, and thriving year round.

With Lawn Love, we make staying on top of your lawn care services easy. Simply sign up for recurring lawn care services, saving you money and time. Your services will be completed either: one time, monthly, bi-weekly, or weekly, depending on your needs. Some services may need to be completed more often than others, so you have complete control over the frequency of each individual service. You can add or remove scheduled services at any time, or you can skip a service as needed.

From there, we will pair you up with a certified lawn professional in your area who’ll complete the scheduled service. Everything is handled within the app including payment, quote adjustments, and rescheduling, so you don’t even need to worry about being home!

Rest easy knowing that the scheduling is done for you and that you have full flexibility to make changes at any time! Get a custom quote for your property and service mix in minutes.

Get a custom quote for your property. 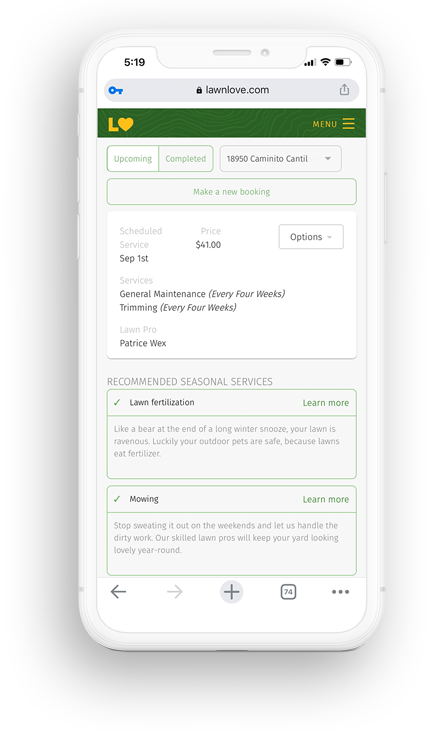 Whether it's via chat, email, or over the phone, our team is always available to help.

What Our Customers Are Saying

Should I water my lawn today?

It looks like the expected precipitation in Salt Lake City is 0.01 inches, which means you will probably have to water your lawn today.

Natural phenomena like varied weather conditions, biological processes, decomposition, germination, and erosion affect the lawn grasses and soils therein to a considerable extent. Due to these factors, the lawn suffers from many issues. There are many such problems, and the most common include crabgrass, compacted soil, brown patches, grubs, disease, pet urine, thatch, sedge weeds, broadleaf weeds, dandelion, and yellow Nutsedge. Our policy is to study the prevalent weather conditions and soil types for devising an efficacious treatment plan in respect of lawn issues.

In Salt Lake City, the summers are hot, dry, and mostly clear, and the winters remain very cold and partly cloudy. Temperature varies from 23°f to 93°f and is rarely below 10°f or above 100°f. Precipitation is 0.04 inches of liquid or liquids equivalent. The wetter season lasts for nine months, whereas the other period remains drier. Rain falls throughout the year. The snowy period of the year lasts for four months. Seven of the twelve soil orders are found in the state of Utah. Arid soils, Entisols, and Mollisols dominate, followed by Alfisols and Inceptisols. Histosols and Vettisoils occur in very small tracts where parent or moisture influences their formation. In Salt Lake City, mainly four types of grasses are found. These are Kentucky bluegrass, Tall Fescue, Fine Fescue, and Perennial Ryegrass.

Your lawn can suffer from Snow Mold issues due to snow accumulation. It appears as matted light brown areas of grass where snow has gathered in piles on your lawn for a long period. There are two types of snow mold: grey snow mold and pink snow mold. These tend to occur in areas where snow builds up in drifts or melts quite slowly, such as on the north side of the building or a house. These molds produce matted, whitish/brown patches of dead grass. Cool-season grasses in Salt Lake City and surrounding areas, such as bentgrass, fescue, and bluegrass, are particularly prone to snow mold. This is a fungus that might cause affected areas of the lawn to die. Our professionals can fix it using the rake. We apply this treatment in matted areas with a leaf rake to circulate in between the grass blades. We mow the grass and remove the leaves' piles to prevent snow molds from any damage.

Necro Ring Spot is caused by a root-infecting fungus that affects Kentucky bluegrass and annual bluegrass. It disturbs the appearance of the grass. Necrotic ring spots often are considered a disease of relatively young fungus 3 to 20 years, but the disease development in older turf is not unusual. These usually occur in cool, wet weather in spring or fall. It is root disease. Therefore, infected roots appear stunted and necrotic when compared to healthy roots. Your lawn care service provider carries out the microscopic inspection of infected roots. This reveals the presence of numerous runner hyphae. Having examined the main cause of this problem, Salt Lake City Lawn Care starts applying its treatment plan accordingly. A few Kentucky bluegrass varieties have moderate resistance to necrotic Ring Spot. In this regard, we apply to overseed on the damaged areas, especially in the fall. Besides, Lawn Love applies traditional practices to suppress the disease. The traditional practices aim to minimize the effects of necrotic ring spot infection. These practices that promote deep rooting during spring and fall help reduce the extent of necrotic ring spots. Moreover, the effects of infection are reduced with these practices designed to alleviate summer stresses associated with compaction, drought, and nitrogen deficiency. Further, our team also uses effective chemical control by the timely application of systemic fungicides in spring.

Salt lake city is the capital and most populous city of the U.S. state of Utah. The city is the core of the Salt Lake City metropolitan area. This is the Church of Jesus Christ's world headquarters of latter-day saints. This city was founded in 1847 by followers of the church. Its street grid system is based on a standard compass grid plan, with the southeast corner of Temple Square serving the Salt Lake meridian origin. Due to its proximity to the Great Salt Lake, the city was originally named Great Salt Lake City. In 1868, the word "Great" was dropped from its name. Due to mining booms, construction of the first international railroad, and economic growth, the city was nicknamed "The Crossroads of the West."

Moreover, Salt Lake City has developed a strong tourist industry based primarily on skiing and outdoor recreation. It hosted the 2002 Winter Olympics. It is also known for its political, liberal, and diverse culture, which contrasts with the rest of the state's conservative leanings. Further, it is the industrial banking center of the United States. There are several higher education institutions located in Salt Lake City.

Why Do You Need Us

Homeowners maintaining a yard may face a few issues regarding lawn care. Due to varied environmental conditions, your lawn might be suffering from problems. Lawn Love is recognized as one of the top-rated service providers in the lawn care industry. Our highly qualified personnel provide lawn care services in your area quite satisfactorily. We fix the problem instantly with a guarantee. Our services are long-lasting and reliable in many ways. You need not have any stress as our local professionals are available in your city with extensive services. You can communicate with us online using our web and landlines. We believe in customer's contentment and happiness.

If you're not completely satisfied we'll come back and fix it, free of charge.

We carry a multimillion dollar liability insurance policy so you're fully covered.